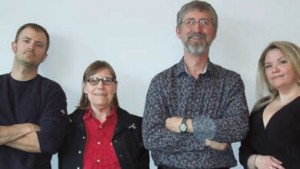 The Kelly Karuzis Band was established a few years ago when Kelly Karuzis joined Moe Ballargeon, Jill Olsen, and Steve Anderson, Jr from a former blues band. Their music styles vary from Rhythm & Blues, Rock & Roll to Old and New Country, giving them a unique and high energy style that all ages can enjoy!

Maurice (Moe) has been playing Bass guitar for over 40 years and his influences are many and includes all styles of music. He has been a resident of Fryeburg since 1975 and loves being involved in the community. Steve grew up in Fryeburg and has been playing guitar since he was 14, strongly influenced by artist such as Stevie Ray Vaughn and Jimmie Paige. Drummer, Jill Olsen has been playing professionally for 43 years and is well known locally from years of performances with many bands. She lives happily in Madison with her husband and two children. Kelly has been singing all her life, influenced by her mother who is also a singer. Kelly lives in Fryeburg with her husband and daughter and is the owner of Small Frye Academy.

When you put these four great talents together you get a sound that is top notch and totally entertaining.

Pre-concert dinner at the Fryeburg New Church on Oxford Street starting at 5PM. Adults $9, children under 12 for $5